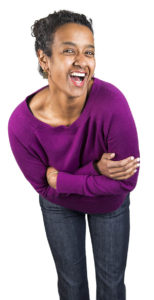 The first time I hit the stage was Halloween, 2012.  I was so nervous about trying five minutes of material without fainting that I forgot to wear a costume.  You were supposed to sign in with the DJ and when I arrived, I noticed a man dressed as Freddy Kreuger taking song requests from customers.  I introduced myself and he shook my hand with his signature claw.  “You’re first,” he said explaining that comedy virgins are sacrificed at the start of every show.

Throughout my set, I got a few laughs.  As I searched my mind for the next joke to tell, I dug deep in my pockets to stop a nervous tremor in my hands.  That’s when I found two game pieces in my jacket.  I thought of my kids. How I’d spent the afternoon playing with them and later found these stray tokens in the living room cleaning up before I left.  That memory centered me.

As I walked back to my table, customers patted me on the back and said I did a good job.  My husband was beaming and couldn’t believe I pulled it off.  He’s been my biggest fan ever since.  I set a goal to get onstage four times a month for a year in order to get passed my fear of public speaking.  This discipline helped me build confidence, enjoy the silence while selling my point of view to strangers, and make new friends with a similar drive to think of ways that even the worst case scenarios can have a silver lining.  I enjoy getting better, getting paid, and representing a female perspective in a predominately male business.  My motto is that you can’t complain about a lack of opportunity if you say no when it’s offered.

Looking back, I think that starting standup for the first time on Halloween was perfect.  What could have been a trick turned out to be a treat.